From the 10th to 12th centuries, Europe emerged from the Dark Ages by uniting into nations and developing a mercantile capitalist economy.

Crusaders, sent to free the Holy Land from Islamic occupation, brought back both technical knowledge and finery, whetting the appetites of nobles who craved more novelty. By the 14th century, quality textiles and fine leathers were being fashioned into shoes which became conspicuous displays of style and elegance, worn to express personal status. Fashion was born!During the 14th century, a trend for pointed toes spread across Europe. The style seems to have originated in Poland as it became known as the poulaine (from 'Poland') or the cracow (from 'Krakow'). Edicts were proclaimed limiting the length of the toe according to the wealth and social standing of the wearer.When the pointed toe style fell from fashion at the end of the 15th century, it was replaced in Northern Europe by wide toe fashions, known variously as the hornbill, cowmouth or bearpaw.An unusual woman’s fashion, at its height of popularity in Venice during the 16th century, was thechopine – a platform-soled mule that raised the wearer sometimes as high as two feet off the ground. By the time this fashion had subsided in the early 17th century, heels had emerged as a standard addition to both men's and women's footwear. 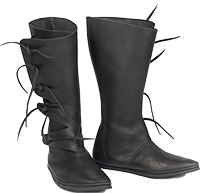